Agilent’s U-Series Multimeters have the ability to be talked to via an infrared interface (and some of them even feature an OLED display), either through Keysight’s slightly overpriced USB-To-IR Adapter, or by building your own. If you intent to follow the latter path, be sure to read Josip Medved’s Info about the Adapter; it covers pretty much everything you need. There’s also a YouTube-Video with a more sophisticated (and probably oversized) approach.

With the communication working (you might test it with Keysight’s own logging-tool), it’s probably more interesting to be able to control the device using LabView. Unfortunately, I could not find any libraries, and the documentation is limited to a post on Philipp Klaus’ blog describing the basic command set. 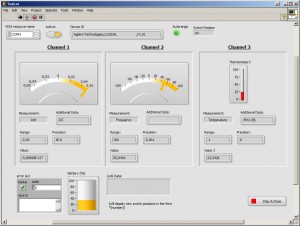 In short, the Device features 2.5 “channels”, or let’s call them data-streams; it is capable of e.g. measuring voltage and frequency of an AC source simultaneously and can additionally report the current ambient temperature; although that feature might not be of so much use. In principle, to continuously read out the data measured by the multimeter, you might want to query it’s current setting (unit, range, precision), it’s value or status (like auto-range, position of the rotary switch etc.).

To find out how to talk to the device, and how to interpret it’s response, I used a Serial Analyzer in conjunction with the original software. The result is a LabView-Library that’s capable of handling a reasonable part of all passive commands ( only limited support for configuring the device so far) – the lib, however, should be considered in alpha-state and might still contain bugs. Every command sent from the computer should be terminated by a single linefeed (0x0A, “\n” etc.); the device itself terminates with carriage return and linefeed. On error, the device will return “*E\r\n”. Most of the time, the meter acts as passive command-responder, except when the user turns the rotary-switch – in that case, the device sends the switch position counting from 0 (and excluding the “off” state – which means you won’t be able to detect a “switch-off” event except with a communication timeout) preceded by a star, i.e. “*1\r\n” for Volt.

The commands I saw on the line include:

Following a “CONF?”, the device answers with it’s current setting (i.e. voltage or frequency) and a few parameters. To request the configuration of a specific “channel”, send “CONF? @#” replacing the # with a number from 0 to 2. The type of voltage or current, or any subtype of measurement is appended to the basic setting with a semicolon. Additional parameters are separated from this basic information with a space, again separated by commas. Example: “VOLT:ACDC +1.00000000E+00,+1.00000000E-04” denotes an AC/DC voltage-measurement with a range of 1 Volt an a maximum resolution of 0.1 mV. The following table will give some more detailed information:

Different “layers” of functionality for specific switch-positions can also be selected via Software. The device accepts two lines of configuration options after a “CLS*” command (I didn’t test it without), the possible options depend on the position of the rotary switch. An erroneous command will be acknowledged by “*E”, the configuration, however, might still be partially applied and might lead to instable operation (i.e. incomplete or overlapping data on the display). Success in changing the configuration will not trigger any response. Note that, upon selecting additional (calculated) quantities, those might become the primary reading; selecting AC-Voltage and Frequency for example will change the first channel to frequency, and reports the voltage on the second channel.

Each switch position allows a different set of options, as can be seen in the following table:

A few VIs exist already to configure the device using the above commands.

The last available switch-position (#8) will allow you to operate a PWM output with 3 Volts/peak and an instrumental precicion of 1/256 of the frequency set. The device features three commands to program the PWM output. “CQU:FREQ X” sets the output frequency to X, possible options can be taken from the manual and range from 0.5 Hz to 4.8 kHz. The pulse width can be controlled from 0.39 % to 99.609 % / total, given in values from 1 to 255. The device has two commands to set the pulse width, “CQU:PWID X” will program the pulse width and display the value in ms, where as “CQU:DCYC X” will display the duty cycle in %.

The code including the sample program can be found on bitbucket.